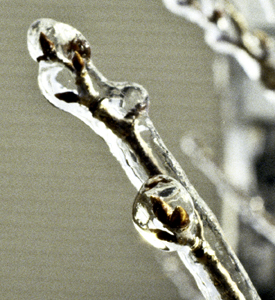 Those of us who live in the temperate zones i.e. those that routinely get at least one killing frost, often have to deal with injury to our landscape plants from cold temperatures. When we venture out into the garden in the early spring, we begin to see dead or damaged plants that seemed to be in good shape the previous fall. What happened?

Of course, the first thing and for some people, the only factor we think about is cold temperatures. However, there are several other weather related impacts that need to be considered.

1. Low Temperature Injury – Most gardeners are familiar with the USDA Hardiness Zone map. This divides each area of the country into units based on the typical lowest temperatures expected. For instance, if you are in USDA Zone 5, you can expect to experience winter low temperatures between -10 and -20 degrees Fahrenheit.

Plants that are not winter hardy for your Zone will suffer damage to buds, twigs, branches or, in extreme cases, the entire plant will die. Basically, this is due to the fact that the cells within the plant tissue will freeze and cause its solid cell walls to break. The dead cells will turn brown and, of course, will never return. 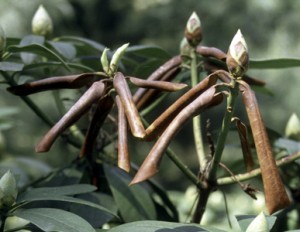 2. Desiccation Injury – Cold air can hold less moisture than warm air. So, cold winds flowing over buds and other plant tissue in the winter may slowly pull moisture from the plant. Since the soil is frozen and the roots cannot replenish the moisture, the plant cells may lose all their water. This will cause death and browning of that tissue. This is especially a problem on broadleaf evergreens such as rhododendrons and boxwood. 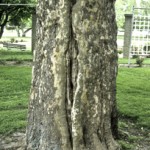 3. Frost Cracks – When the wood on trees or shrubs is frozen but the sun shines on a January or February day, there may be enough heat generated to begin to expand the exposed bark. Since the wood beneath is unable to move, the bark may develop a split. Often, but not always, this split will be on the south or southwest side of the tree since that is the direction of the most intense winter sun.

4. Snow or Ice Damage – The weight of ice or snow may cause flexible trees such as birches or evergreens such a pines bend over. In some cases, this will be heavy enough to actually break off the branch or the entire tree. In others, however, it merely bends the plant and it will return to its formal position. Unfortunately, the bending may have cracked the bark allowing fungal organisms to enter the plant and cause the development of open wounds called cankers.

5. Salt Damage – Although special anti-icing products are now available that do not damage plants, plenty of people still use good old salt. Whether the salt is regular table salt or a granular fertilizer, it has the same effect on plants. When salt comes into contact with plant foliage or roots, it forms a powerful attraction to water. It will pull the water out of the plant tissue causing it to die and turn brown.

6. Heaving – Soils that contain a lot of clay are plagued by a process called heaving. Clay soils are poorly drained and retain too much water. During the winter, when that water freezes, it expands. This can cause damage to roots and, in some cases, may actually push plants out of the ground. The effect is greater on plants that were installed late in the fall and have not had a chance to establish enough roots.

7. Rodent Damage – Unlike bears, mice do no hibernate in the winter. Therefore, they need to continue to eat. If the winter has a lot of snow and other food sources are denied, mice may turn to chewing on the bark of trees. Often, they will burrow under the snow and much and eat the bark at the base of the tree. If they destroy enough of it, they will have girdled the tree resulting in its loss.

8. Early Spring or Early Fall Frosts – Plants that are hardy for cold winter areas have developed one or more techniques for surviving. Generally they build up hardiness slowly in the fall, reach peak hardiness in the height of winter and then slowly lose hardiness into the spring. For example, a plant buds that will survive in -20 degrees in February, may be damaged or killed by 20 degrees in October or March.

So, what can you do about all these problems? Check back next week for How to Avoid Winter Injury in Landscape Plants.

4 thoughts on “Winter Damage in the Landscape”