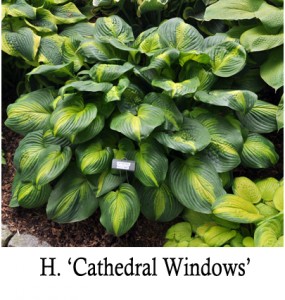 The genetic information about all types of living organisms is multiplying exponentially today. It is growing in terms of our understanding of hostas too. As a Hosta Rookie, it is probably a little early to clog your mind with too much of this stuff. So, here are a few of the basics that will get you off to a good start. How much deeper you want to go into the science of genetics is up to you.

Hostas have 30 chromosomes in each of the male i.e. pollen, and female i.e. egg, parts. During the normal fertilization process 30 chromosomes come from the mother and 30 from the father for a total of 60. This is called a diploid or 2n plant which represents 2 sets of chromosomes that make up the genetic information in the resulting seeds and seedlings.

Probably the greatest thing for the Hosta Rookie to understand in all this is that sometimes something happens in the cells of a plant which results in more than 2 sets of chromosomes being present. The most common variation you will encounter is when you hear of plants called tetraploids.

Instead of having 2 sets of chromosomes, tetraploids have 4 sets. This occurs occasionally as a natural mutation so there are plants in the wild who are tetraploids such as the species Hosta ventricosa or triploid i.e. 3 sets, like Hosta clausa. However, people have now also figured out ways to treat hostas with chemicals to create plants with extra sets of chromosomes.

Perhaps the first way was an unintended exposure of hosta plants to the herbicides named Surflan (oryzalin) and Treflan (trifluralin). Following this exposure, the nursery person noticed a change in the physical characteristics of hostas. 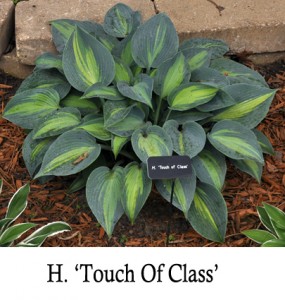 A second, much more common way that tetraploid hostas have been induced is through exposure to certain plant hormones during the tissue culture process. We will cover tissue culture in greater detail later but suffice it to say that part of the process involves the use of plant hormones such as indole butyric acid (IBA) and naphthalenic acid (NAA). For some reason, certain hostas exposed to this treatment will develop tetraploid plants.

Daylily (Hemerocallis) breeders have been developing tetraploids for several decades. They often use a chemical called colchicine which is an extract from the fall crocus, Colchicum speciosa. It appears that this chemical does not have the same effect on hostas, however.

So, why are we so interested in tetraploid plants? Well, not only do they have a unique genetic makeup, tetraploid plants also generally have some unique physical characteristics including:

1. Plant Size – Tetraploid plants tend to be a bit smaller than diploid plants of the same cultivar and have shorter leaf petioles. However, this more compact structure makes for a denser plant habit.

2. Substance – Compared to a diploid plant, the tetraploid has thicker cell walls and larger stomata guard cells resulting in a leaf with thicker substance. The petioles are thicker also.

3. Flowers – This is the area where the daylily people have made big advances with tetraploids. The flowers of these plants are larger and have thicker petals or, in the case of hostas, tepals. Also, flowers of tetraploids produce larger pollen grains than their diploid counterparts.

4. Flower Scapes – The flower stalks will be shorter and thicker on tetraploids. Often the flowers on the scape will be compacted together in a denser arrangement.

5. Seed Pods – On tetraploid hostas, the seed pods will be shorter in length and thicker.

6. Growth Rate – In general, tetraploid plants will have a slower growth rate than diploids of the same cultivar.

7. Roots – In keeping with the general trait of these types of plants, the roots of tetraploids will often be shorter in length.

9. Chloroplasts – Chlorophyll is, of course, the green pigment. The chloroplasts are the structures where chlorophyll resides and where photosynthesis takes place. In tetraploid plants, there may be up to twice as many chloroplasts as in the diploid plant.

10. Leaf Surface – For cultivars with corrugations or ripples on their leaves, tetraploids tend to be more pronounced.

CAUTION: Now that we have told you all the characteristics that may indicate a plant is a tetraploid, be aware that it is not that simple. Even if a plant has ALL of these traits, the only way to know for certain that the plant is a tetraploid would be to subject it to a bunch of different laboratory tests. Also, it would take a person well-trained in the science to examine the morphology of the plant and, perhaps, do some cross-breeding to tell for sure. Most of what you hear about a plant’s tetraploidy will be a matter of opinion. It may well be truly tetraploid but not proven yet by analysis.

3 thoughts on “Diploid vs Tetraploid Hostas”