So far, all 43 hosta species have been found to be native to parts of Asia only. The largest number come from the various islands of Japan while smaller numbers of species originated in Korea and China. Several European plant explorers “discovered” hostas and started to bring them back to be introduced into Europe. 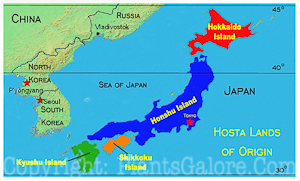 The first documentation of the genus, Hosta, came from a medical doctor with the Dutch East India Company named Engelbert Kaempfer (1651-1715). Dr. Kaempfer was stationed in Japan but was segregated on a tiny island and was not permitted to travel around on his own. Somehow, he was able to get local Japanese to bring him plants and he made a drawing of one that was later identified as Hosta ‘Lancifolia’. Unfortunately, he was not able to bring back any live specimens.

Although, by far, most species of hostas come from Japan, the first two plants to be introduced into Europe came from China. It is believed that Hosta plantaginea was first grown in Paris at the Jardin des Plante in the mid-1700s while Hosta ventricosa found its way to a private garden in London about the same period. According to Zilis (2009), Hosta lancifolia, H. plantaginea, H. ventricosa and H. ‘Fortunei’ were the first hostas to be introduced into Europe.

Two of the primary early explorers who were later able to actually bring hostas back to Europe from Japan were Philip von Siebold (1796-1866) and Robert Fortune (1812-1880). 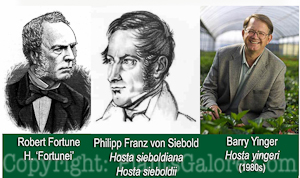 Von Siebold was a medical doctor from the Netherlands who traveled to Japan in 1823. He was able to acquire many Japanese plants that he later brought back to Europe. He returned on a second trip in 1859 and had more freedom to roam around the islands to collect plants. Among these were several species of hosta. Back in Holland, von Siebold was instrumental in setting up the first botanical garden at the University of Leiden.

Perhaps the most common hostas of all belong to the large, blue-green leaf species that bears his name, Hosta sieboldiana. (Remember that this might be changed to Hosta ‘Sieboldiana’ in the future.) It comes from Honshu Island in Japan. The other plant, Hosta sieboldii, is a small plant with narrow leaves that have a slender, white margin of variegation. There is also some debate as to whether this is a true species but, so far, it remains listed as such.

Robert Fortune was one of the first European plant explorers to be allowed to wander around China to collect plants. He was educated at the Edinburgh Botanic Garden in Scotland and worked for the Royal Horticultural Society at their gardens in Chiswick in England. They sponsored his expeditions to gather exotic plants to bring back to Great Britain.

In addition to rhododendrons and many, many other plants, he also brought hostas back to Europe. One was given his name as a species, Hosta fortunei but Schmid (1991) found no evidence that this plant actually came from the wilds so it was reclassified as a cultivar, Hosta ‘Fortunei’. This confusion occurred probably because the people back in Europe figured that the plants were from wild populations. In reality, the local Japanese people who procured some of the plants for the explorers may have gotten them from private or temple gardens where they had been growing in cultivation for hundreds of years.

Modern day plant explorers continue to periodically scour Japan, Korea and China in search of new species of plants that might be prime for introduction into America, Europe and other countries. In fact, in 1985, an American horticulturist, Barry Yinger, was exploring in remote areas of South Korea when he discovered two new species of hosta. One of them was named in his honor as Hosta yingeri and the other was  H. jonesii. The second new species was named for botanist Dr. Samuel B. Jones of the University of Georgia who helped Yinger identify the plants.

To learn a lot more about the genus, Hosta, its species and cultivars along with the people who have made hostas the Number One selling perennial in the U.S. please checkout our new eBook – A Rookie’s Guide to Hostas, Hostas, Hostas.

2 thoughts on “Origin of Hosta Species”