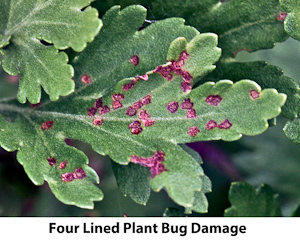 What are those tiny black circular spots that mysteriously appear on the surface of leaves of mums (Chrysanthemum), mints (Mentha), Shasta Daisy (Leucanthemum), speedwell (Veronica) , black eyed Susans (Rudbeckia) and many other plants? Is the damage due to disease or insect or something else? Odds are that they are the work of a critter called plant bug.

Although we often use the term “bug” as being synonymous with insect, “plant bugs” are a specific subdivision of the insect world. They are insects of the Order Hemiptera whose mouthparts are adapted for piercing plants and sucking their juices. Several of them are common pests in the home landscape.

The tarnished plant bug (Lygus lineolaris), Harlequin bug (Dindymus versicolour) and the four lined plant bug (Poecilocapus lineatus) commonly cause this type of damage. These critters have round mouth parts that attach to the surface of leaves, stems or buds while the insect sucks juices out. The bugs spittle is toxic to the plant so the injured area dies and turns black leaving a spot. After a large number of bites, the entire leaf may curl up and take on a malformed appearance often mistaken for a disease.

The tarnished plant bug is 1/4 inch long and green to brown in color. It is a very active bug and moves rapidly. The adults hibernate in leaf mold, tree bark or under mulch.

The four lined plant bug has been especially active this past summer. It is about a quarter of an inch long and is greenish yellow with four black lines on its back. The immature nymph form of the insect is reddish in color and appears usually about early June. It tends to feed on members of the mint family, herbs and several flowering plants including chrysanthemums, aster and even, occasionally, hostas.

It is often difficult to observe plant bugs at work and the damage just seems to “appear” which also lends to the belief that it is a disease. Plant bugs tend to be very shy. When they hear you approach, they will scurry away and hide lower in the foliage. If you stand over the plant quietly for a while and watch without moving, they may come back out onto the leaf surface and begin to feed again.

A very patient person with a lot of time on his or her hands can treat the bugs by spraying them individually with insecticidal soap. Remember that the soapy solution has to go directly onto the insect’s body and it is not good enough to just spray the foliage. Soaps work by melting the waxing coating on the external skeleton of the insect. When the wax is gone, the bug will dehydrate and die.

Other organic pesticides such as sabadilla dust or rotenone applied to the foliage can be effective. Also, of course, there are synthetic chemical insecticides that are also labeled for use against plant bug damage.  Of course, the final decision on your course of action is up to you. If the damage is not severe, you might just choose to live with the little creatures.

As always, if you have an questions, comments or requests for specific topics to be covered in a future, blog, please let us know.