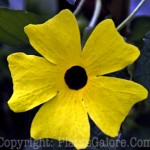 Vines are great additions to the home landscape. The majority of the ones we commonly use fall into the category of woody perennials. They form woody stems and persist from year to year. A handful of vines such as black eyed Susan vine (Thunbergia alata) or hyacinth bean vine (Dolicus loblob) are annuals and give a good display in a single season of growth.

I love the way vines can raise the level of the garden up into the air. By growing up a trellis or fence, they stand above the typical perennials and some of the smaller shrubs. This helps to expand the area in which we can display beautiful flowers and foliage. They can fill that space between the top of the taller perennials and the lowest branches of the trees. Vines can also soften the visual impact of brick on a building.

The range of ornamental vines available today is enormous. One catalog I have seen includes 300 different species and varieties of English ivy! The variations in size, leaf color and flowers are enormous and vines should be a part of any home landscape. 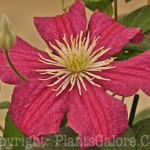 Clematis (Clematis) is, perhaps, the king (or queen) of the ornamental vines. The hybrids that are available have huge flowers and many now bloom throughout the summer. They climb by using tendrils so they need something to latch onto such as a trellis or fencing. Clematis tend to be one of those plants that might “just sit there” for the first year and not seem to do much growing. Then, when the roots get established,  they can take off and become a beautiful, floriferous vine in future years.

A few species of late season flowering clematis only bear flowers on newly produced vine so they need to be cut down severely each spring. Certain early season flowering types bloom only on vine produced during the previous year so these types need to be pruned after they bloom. However, most of the varieties now on the market will flower on both old and new vine so pruning can be kept to removing winter damage or keeping it in bounds. Usually, if a particular type needs pruning, the packing instruction or tag on the plant will let you know.

BTW – I have heard the name Clematis pronounced in at least three different ways. In the end, it only matters as long as proper communications takes place and both parties understand that they are talking about the same plant. At least that is MY opinion on plant names. More on that in another blog sometimes.

Honeysuckle (Lonicera) vines are one of my favorites. In fact, one in my yard has the distinction of being the longest continuously flowering plant in my garden. It begins flowering in mid-May and has blooms on it until a heavy frost in late October most years. About the only problem with them is that you need to do a little pruning to keep them from becoming too rampant. There are many named cultivars and their tubular flowers are ideal for attracting hummingbirds.

For fall flowering, the Silver Fleece vine (Polygonum aubertii) with its bright white flowers is hard to beat. It is a vigorous grower and may put on 20 feet or more of growth per year. I find that it does quite well covering a fence in a partially shaded area of my garden. It begins flowering in August and continues through early to mid September.

The ivies (Hedera) are fun for foliage color and different leaf forms and shapes. Of course, they will climb up trees, fences or just about anything else with their aerial roots. There are many variegated types with yellow or white variegations and leaf sizes from miniature to several inches in diameter.

As long as the ivies grow in the vining form, they do not flower. They are technically juvenile tissue, incapable of forming reproductive parts. However, so-called adult ivies are also available which grow in a more upright, shrub-like form. These will produce flowers and seeds. They make an interesting specimen plant for the garden. 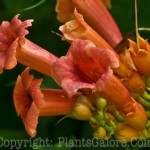 Trumpet vines (Campsis) can also be a nice addition to the landscape with their large red, orange or yellow flowers. However, they tend to be a little large and aggressive unless you are willing to spend some time to keep them in line. I have seen beautiful specimens that have been trained into a standard form and look like a small tree. They will have an umbrella like canopy and can be an interesting focal point in the lawn.

Vines can add flexibility and color to your landscape design. There are, of course, many, many more types to consider so give them a shot!