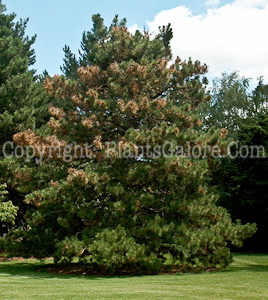 Many pine (Pinus species) trees in the landscape and along the road may be looking pretty sick this time of year. Their needles are turning brown and, at times, some larger branches are dieing. In a few cases, an entire tree may suddenly turn brown and die in less than a month. What is going on?

Much of the damage is a result of winter weather. Cold, dry winter winds in combination with dry soil will cause pine and other evergreen needles to lose water but they were unable to replenish the moisture from the frozen soil. This will cause needles to turn uniformly brown from top to bottom. Severely affected needles will drop off and some twigs or branches may also die. For the most part, however, trees should survive and will green up again over the coming year or so.

A more persistent problem was caused by the fact that thirty to forty years ago, we began extensively planting species of exotic (non-native) pine trees. Scotch (Pinus sylvestris) and Austrian (Pinus nigra) pines were planted for their landscape characteristics or, in the case of Austrian pines, because they are more resistant to highway salt damage than our native white pine (Pinus strobus).

Many exotic trees start out just fine in their adopted climate. However, they are often not well adapted to either extremely cold winters or excessively hot summers. While the plants are young and vigorous, the effects of these stresses do not show up but when the trees get old and large, the problems begin. The situation is often compounded when the young trees are planted too close together or are too near sidewalks, driveways or buildings. When they get large their root systems become limited or crowed together and this increases the stress. 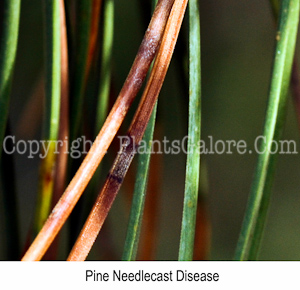 Trees under stress are more likely to become infested by insects or attacked by diseases. This is what is happening to many of the big Scotch and Austrian pines today. If you inspect the bark closely, you will often find small, pencil lead size holes. This indicates the presence of bark beetles or boring insects that are damaging the interior wood of the tree. Borers are almost always associated with plants under stress.

The brown needles are usually the result of fungal problems called a needlecast diseases. If the needles are uniformly brown from tip to bottom, the problem is generally caused by lack of water or winter burn. Needles that have different colored rings around them or small black dots are infected with a disease.

Austrian pines have two major diseases. Diplodia tip blight kills each year’s new growth causing the tips of branches to turn brown and die. In advanced cases, this may move down the branch and kill it too. The other problem is Dothistroma needle cast which affects needles further down the branch. Needles infected by this disease will have a characteristic orange band midway down the needle.

Occasionally, an entire large Scotch pine will suddenly turn brown from top to bottom and die. This is almost always caused by the pine wilt nematode which invades the tree and causes the vascular tissue to become clogged. The tree cannot move water from the roots to the needles so it must die.

Trees that die from pine wilt have two major symptoms. First, the rapid death of the tree within about a month’s time is a telltale signal. Most disease and insect problems of trees don’t kill them that quickly. Rather, they chip away at a tree over years and make it weaker and weaker until it dies.

Second, when the tree is cut down, there will be a blue stain in the wood. This is a secondary fungus that is nearly always present when pine wilt has occurred. The only way to know for certain is to have a laboratory test which will identify the nematodes that remain in the wood. Unfortunately, this is done after the tree is already dead.

What can we do? Well, as with all plant problems, the first thing is to keep the tree as stress free as possible. Keep them watered during hot, dry periods of the summer. Thin out stands of trees to allow more room for the remaining individuals. Plant new trees with enough room to accommodate their mature size.

For Austrian pines, there are chemical sprays that can be effective at fighting both Diplodia tip blight and Dothistroma needle cast. In tests at Michigan State University, some large, heavily infested specimens were brought back to respectability over a period of several years. However, this requires yearly sprays at exactly the right time in the spring. It is a never ending process.