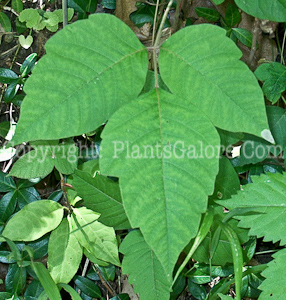 Anyone who has ever experienced the blisters, swelling, and extreme itching from an unfortunate encounter with poison ivy, learns quickly to avoid it whenever possible. It grows in non-cultivated sites, such as along stream banks, roadways, fence rows, and woodlands. The nasty weed can even make an appearance in your ornamental shrub or perennial borders especially in hosta or other woodland based areas. Therefore, knowing how to identify and control poison ivy are the best defenses against accidental contact and nights of itching and scratching.

The best way to identify poison ivy (Toxicodendron radicans) is by its characteristic compound leaf consisting of three leaflets. There is a lot of truth to the old saying, “Leaves of three, let it be.” The leaflets are each two to four inches long, dull or glossy green with pointed tips. The middle leaflet is generally larger than the two laterals. The margins of the leaflets are variable, appearing irregularly toothed, lobed, or smooth. The leaves are positioned alternately on the stems. 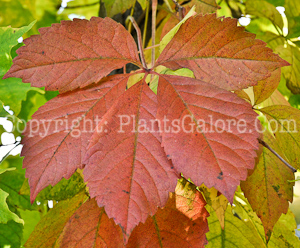 In contrast, Virginia Creeper (Parthenocissus quinquefolia), a non-poisonous vine often mistaken for poison ivy, has five leaflets radiating from one point of attachment. I use a slight variation on the poison ivy saying, “Leaves of five, let it thrive.”

Poison ivy can be found in one of three forms; as an erect woody shrub, a trailing shrub running along the ground, or a woody vine. The vine is usually seen growing on trees or other objects for support. It has aerial roots along the stem that give it the appearance of a “fuzzy rope.”

Yellowish-green flowers occur in compact clusters in leaf axil, and are produced in June or July. These are followed by a waxy, berry-like fruit which is grayish-white and have distinctive lines marking the outer surface. They are about three-sixteenths of an inch in diameter.

Poison ivy is “poisonous” all year around. The oil in the leaves, stems, roots and fruit are what cause the skin irritation. Actually, the rash is an allergic reaction. As I understand it, the allergy may be developed at any point in your life. For instance, you might get by handling poison ivy for decades and the, all of a sudden, develop the allergy and become infected. Therefore, regardless of your history, care should always be taken when working in or near poison ivy.

Although direct contact with the plant is the common method of transfer, handling clothing, tools, objects or animals that have become contaminated with the oil may also result in spreading the problem to people. I once had a lady tell me that her husband had shot a rabbit and it had come to rest in a patch of poison ivy. She wondered if she was safe in touching the rabbit since she was very susceptible. Sounded as if she would be taking a big risk in preparing the rabbit for the dinner table. 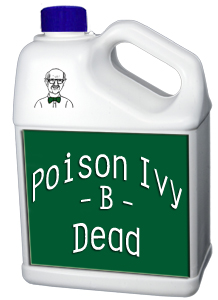 There are at least three approaches that can be effective in eradicating poison ivy in ornamental beds. They include hand pulling or grubbing out; severing the vine near ground level and then treating the cut stem and regrowth with an herbicide; or applying an appropriate herbicide to the leaves of individual poison ivy plants.

Hand pulling should not be done by people who are sensitive to poison ivy, of course. Even if you seem to immune, always use heavy rubber gloves. This method is most successful when the soil is moist. The roots can be dug and pulled out in long pieces. Care should be taken to remove the entire root because the plant can re-sprout from sections of root left in the ground. One method of disposing of the plant material that has been dug out is to bury it in a hole several feet beneath the surface of the soil. Do not just put it into a plastic bag for the garbage man who might not like being exposed to poison ivy any more than you.

Avoid skin contact by wearing gloves while you work and washing clothing and gloves immediately after. The washing machine should be rinsed thoroughly afterward to eliminate the possibility of contaminating other clothing. Also remember that oil may be on the glove so care must be taken in disposing of them too. All in all, this is a difficult option for removal of poison ivy.

Vines growing on trees can be difficult to pull out of the ground because their roots may be entangled with the tree’s roots. Again, wearing rubber gloves, cut the vine at the base and carefully pull it out of the tree. An herbicide specifically labeled for poison ivy control can be applied to the new shoots that will soon emerge from the base of the old plant. Herbicides are most effective if applied to actively growing foliage of young vines two weeks on either side of full bloom, in early summer.

Even herbicides labeled for poison ivy will rarely provide complete control from a single application. Poison ivy is a vigorous plant so repeat applications over an entire season may be needed as new growth appears. Be sure to read the label to ensure that poison ivy is listed on the label, then follow the manufacturer’s directions.

Fortunately, poison ivy is not a big fan of cultivation. It is generally found in areas where the soil has not been disturbed recently. Often if it is found in a flower bed or border, it is creeping in from surrounding areas.